Cari Roy has gained recognition as New Orleans' most accurate and empathic psychic reader and medium. A third-generation New Orleans psychic medium, Cari’s mother was a spiritualist practitioner and clairvoyant. Her maternal grandfather was a master astrologer and numerologist. This made her upbringing a fertile ground for what would be the blossoming of her own extra-sensory abilities. Her 30 plus years of professional experience have honed those talents into skills.

At the age of 7, Miss Roy began displaying her psychic gifts, sensing spirits and past lives, and foretelling events. She considers herself blessed to have had the guidance of her elders in understanding and developing her gifts. “I believe that everyone is born psychic. It is just that many are discouraged and learn to fear it”. Participating in séances, learning all forms of divination, reading astrological charts, practicing automatic writing and dream interpretation were just some of the many aspects of her intense training. Her father’s profession as an opera singer allowed her extensive travel and the opportunity to embrace cultural diversity in all of its marvelous expressions. Not only did this heighten her natural empathy but also gave her a well-rounded understanding and appreciation of the human experience and the eternal truths we all share.

In her late teens, Cari knew without question that it was her calling to follow the family tradition of using her spiritual gifts to help others. Not taking this lightly, she went on to continue her education, attending university to study comparative religion, psychology, and cultural anthropology. After completing school Cari settled briefly in England to pursue more spiritual practices and then on to Switzerland, the home of her maternal lineage. During that time Miss Roy felt that, at last, all of her knowledge and experience was ready to be put to practical use. 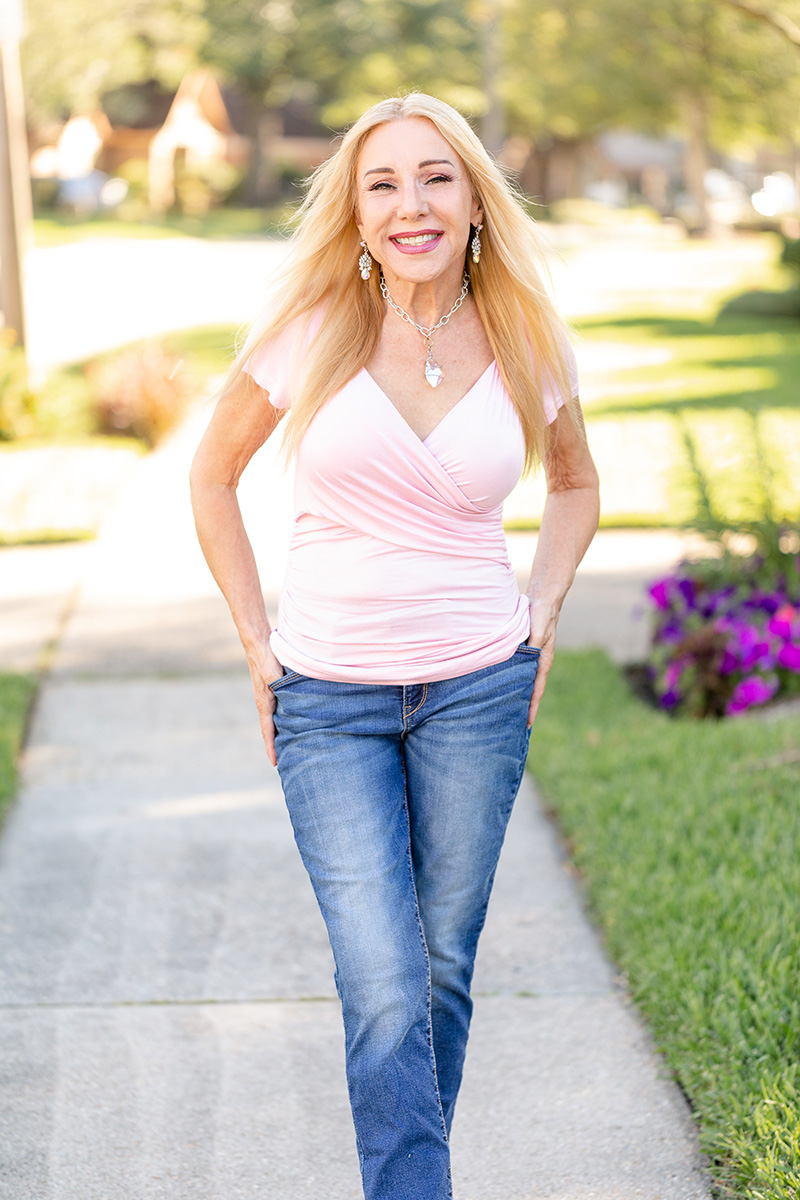 Cari Roy began her career as a professional psychic medium in New Orleans in the late 1980s. As word of her high accuracy, detailed information, and engaging style spread, her clientele grew rapidly. She became the reader of choice for literally thousands ranging from celebrities to stay-at-home moms and from CEOs to psychoanalysts and everyone in between. “I love human being-ness and each and every one of my clients is of tremendous individual importance to me”. Miss Roy does not use cards or palms etc… She prefers to give pure psychic and medium readings without the reliance on external devices.

“I hope that one of the things I do best is to reject the cookie-cutter approach to readings and provide real tangible information based on each client's unique circumstances, information that they can then use to create happiness, peace, and fulfillment in their lives”.

“Everybody has a purpose in life and mine has always been to help others. Not only is it my purpose, but it is also my passion. I feel honored to be able to connect with people on such a deep and meaningful level. It truly is my pleasure to be of service”.

Considered an expert in her field, she has been featured as a lead psychic in several documentaries filmed in New Orleans. She has appeared twice on The Today Show, in A&E’s Haunted Houses - Tortured Souls and Restless Spirits, The Travel Channel’s America’s Most Terrifying Places and The Dead Files: Revisited, Award-winning ISPR’s New Orleans - Rich and Haunted and in Creative Health & Spirit Film’s The Many Faces Of Psychic Ability. Cari has also appeared on local and national radio and news shows, been referenced in books about local culture, and is in much demand for conventions and special events. She is named “#1 Psychic Medium To See In New Orleans” by travelchannel.com and recommended, “Best Psychic Medium To See In The Us” by bbcamerica.com.

Another highlight of Miss Roy’s career has been her work as a psychic medium in many high-profile paranormal investigations of some of New Orleans' most haunted landmarks including French Quarter hotels and restaurants, plantations and mansions, and notable local author, Anne Rice’s, exclusive Garden District properties. She is also co-star and co-producer of the YouTube show Paranormal New Orleans.

While feeling flattered and fortunate to have the opportunity to participate in various areas of the paranormal phenomena, Cari’s real love is to give psychic and medium readings. In New Orleans, Cari still enjoys an active and growing clientele of visitors, locals, long-time repeat clients, and referrals. She offers in-person psychic and medium readings in New Orleans CBD and phone consultations, toll-free, anywhere in the USA.

What Others Are Saying About Their Experience with Cari Roy...

Click on each of the toggles below to read the full testimonial.

“New Orleans most renowned psychic – THE best psychic to see!”

“Since 1998, Cari has blown me away with her amazing and accurate Psi abilities..." Expand

“Since 1998, Cari has blown me away with her amazing and accurate Psi abilities - both in the arenas of professional paranormal research and individual clairvoyant guidance. I am fortunate to be part of a large and continually growing circle of people whose lives are enriched by Cari on so very many levels”

“I’ve called on Cari’s amazing psychic powers many times over the past 15 years. She is always right on the money and I highly recommend her to many of my closest friends”

“Cari Roy is the real deal! She is the most accurate and helpful psychic I have ever consulted. Her readings give specific details – “a lady whose name starts with “J” will help you find the house you are looking for” – that enable me to recognize special opportunities so that I can take action and move in the direction of my dreams.”

“I originally went to see Cari for insight about my career..." Expand

“I originally went to see Cari for insight about my career. Her knowledge, understanding of people, and spot-on intuition helped me to follow my dream and open my own business. With the help of Cari, this happened 3 years sooner than I expected! Since then she has helped me maintain the direction that is best for my wellbeing and my business. I have referred friends and family members to her and they all got the same results I did; peace of mind, direction, and focus.“

“For more than 10 years I have relied on Cari Roy’s startling accuracy." Expand

“For more than 10 years I have relied on Cari Roy’s startling accuracy. Her wisdom, insight, and sense of humor make getting a reading a healing revealing experience”

“As a business owner in New Orleans, it’s important that I recommend only the very best." Expand

“As a business owner in New Orleans, it’s important that I recommend only the very best. This is why I highly recommend Cari Roy. She continues to delight my guests with her readings and is a great addition to anyone’s New Orleans travel experience."

“Cari is a gifted psychic with genuine compassion for people." Expand

“Cari is a gifted psychic with genuine compassion for people. She makes you feel comfortable, safe, and deeply understood. Cari’s readings are filled with light and will leave you feeling uplifted”

“Men, marriages and careers have come and gone and Cari Roy has seen me through them all..." Expand

“Men, marriages, and careers have come and gone and Cari Roy has seen me through them all…before they happened! I have benefited from her abilities for over 20 years, guiding me with wisdom, insight, and clarity. An immensely gifted woman”

“As a writer on spiritual practices in New Orleans, I have used Cari Roy as..." Expand

“As a writer on spiritual practices in New Orleans, I have used Cari Roy as a local expert resource and found her to be very informative and insightful”

"I first met Cari Roy in 1998 when we were members of the same team of paranormal investigators..." Expand

"I first met Cari Roy in 1998 when we were members of the same team of paranormal investigators in the French Quarter. I was amazed by Cari’s psychic and medium abilities on those investigations all those years ago and she still amazes me today. Not only can she clearly see through the veil between the living and the dead, she is also a phenomenal psychic reader. I own a small B&B near the French Quarter and also lead walking tours. As a result I meet many tourists, some of whom ask if I know any good readers. I always recommend Cari. Not only is she psychically gifted, but she is intelligent, genuine, and kind. Even though she has a strong connection with the spirit world, Cari Roy has both feet on the ground in this world."

“I have always found Cari’s psychic abilities a tremendous asset in my life." Expand

“I have always found Cari’s psychic abilities a tremendous asset in my life. There are times when we are so involved in the karma of relationships that we are unable to see the forest thru the trees. This is when I find it’s time to call Cari. She is able to see and precisely call the dynamics of what is truly going on with my relationships and with all its players. I find that a quarterly reading with Cari helps to clear the reality decks and I am able to proceed with clarity. Cari Roy is a reader’s reader”

“Cari Roy proves to be entirely accurate in her readings for me. I find her to be a terrific reader with great integrity”

"Cari Roy is one of those connected beings that taps into the paranormal with ease." Expand

"Cari Roy is one of those connected beings that taps into the paranormal with ease. I first called her in 1997. I told her of some odd things happening around my house…pictures flying off the wall, mirrors dropping on people off mantles, figures being seen in rooms, but then not there, etc. I asked if she could set up a time to come over and the phone (which was a landline on both ends) started sounding static. Cari replied, 'I don’t have to come over, they are aware of you asking, hear that static? There are three spirits in your house. Two are not very active, but one of those is what you saw in your dining room. The active one is a woman that lived in your house most of her life and died there about sixteen years ago. Her name starts with an S. She is not dark, nor does she mean you harm, she is just afraid.'

I told Cari I noticed things most when I would have people over for a party or soon after. 'If you bake some muffins or cookies and explain to her that you are having friends over and it will be okay the activity should diminish or stop.' I did as she suggested and not only did all the activity stop the whole energy in the house shifted from anxious to peaceful! I later found out that the woman who lived in the house almost twenty years before me was named Sarah!!! Cari Roy is the REAL DEAL!"

"I would wholeheartedly recommend her to anyone needing spiritual guidance” Expand

“Cari Roy is the real thing! From my very first reading, she has helped me prepare for future opportunities and has saved my bacon more than once. She doesn’t use tricks such as homing in on vague images, either. Relying strictly on her psychic abilities, she consistently hits upon future events and people in my life. Many times, I have recognized her accuracy only later when her predictions start to happen. I would wholeheartedly recommend her to anyone needing spiritual guidance”

Click here to read about Cari on travelchannel.com
A Letter From A Skeptic

Toll-Free Anywhere in the US