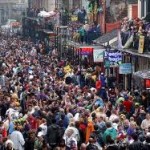 Each year the season kicks off here in New Orleans on January 6th, the Epiphany, and runs straight through till Ash Wednesday.  King Cake parties occur all over town helping to fatten us up before the lean days of Lent begin.  Excess rules as our calendars fill with masked balls and parades.  Beads become the currency of choice and cries of “Throw me something Mister” echo through the crowds.  We all work diligently on our costumes which have to be different every New Year to wow and dazzle both locals and visitors. Feathers, sequins, and glitter are in high demand as both Dames and Monsieurs gussy up when Carnival time rolls into high gear, two weeks before Fat Tuesday.  I will go through three or four costumes in attendance at events and each will be more fabulous than the next with the grandest being worn on the big day itself when I fully give into the magic of Mardi Gras.

The first records of Mardi Gras in New Orleans are from the mid-seventeen hundreds. Depictions of fancy dress balls and costumed street reveling give a glimpse of the origins of traditions adhered to with pride. Revelers with hidden faces allowed aristocrats and servants to celebrate side by side. This is a day when class rules are abandoned and every man can be king and every woman queen. The entire city is dancing, drinking, and carousing without care and living the motto “Laissez Bon Ton Rouler” or, “Let the Good Times Roll”. One can feel the psychic pulse of the masses as they pay homage to Lord Bacchus and can’t help but be lifted by the spirit of pure joie de vivre. We march along paths etched with the energy of the ancestors that paved the way and this only adds to the commitment to make this one of the most fun days of one’s life.

It will begin for me at 7 AM when a band of mischief-makers dressed as skeletons runs through the neighborhood knocking on doors and banging pots and pans. This heralds my awakening to the wonderful childlike world of make-believe where I can and will transform myself into a creature of my imagination. Putting on wigs and makeup, friends stop by and we start the party early. By 10 am everyone is dressed and lubricated and we spill into the street in song and dance meeting fellow wildly clad celebrants as we go to the march in one of the oldest marching Krewes in the city, the Krewe of St. Anne. Hundreds of exquisitely costumed paraders congregate to walk to and through the French Quarter, each of us playing the role of our chosen characters, stepping outside of ourselves to express an alien aspect of our nature. A day devoted to being able to be anything that you want to be utterly and completely swallowed at the moment. Tourists ask for poses as the clicking of hundreds of cameras fills the air. All the bells and whistles go off as one basks in their own celebrity. Everybody is a star shining brightly in the crescent city walking along their own red carpet which is Royal or Bourbon Street or both as the day wears on. Rejoice and be free while you can because at the stroke of midnight the sweepers and mounted police come barreling down the street to officially put end to the festivities. A reality check is served and everyone scurries home before they turn into a pumpkin. Tomorrow brings normalcy and no matter if you were Marie Antoinette today, tomorrow is back to the mundane until the next festival rolls around.

One of my favorite sights to see is the line outside of St. Louis Cathedral on Ash Wednesday. Going as far back as the entrance to Jackson Square, the devout of the city, barely able to stand straight due to the previous day’s indulgences, wait patiently to be absolved. Now is the time many relinquish the joys of the flesh and practice the art of moderation. For many New Orleanians, this is their second chance at a New Year resolution but as with many such resolutions, the success rate is iffy. One thing is for sure, everyone’s mind begins ticking immediately to decide the theme of their next year’s costume. You see there are only two real times of year in New Orleans. One is Fat Tuesday and the other is the 364 days that lead up to it. The magic of Mardi Gras is part of each of us and continues to thrive as long as we dare to dream. 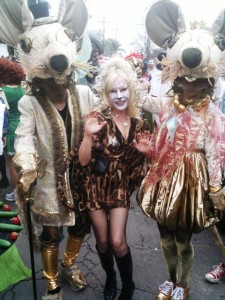